Collection of hotels Grecotel in CreteWhat do you know about this summer holiday, if you have never been to Crete? The advantages of an ideal resort can be listed for a long time, but there…

Top 10 places to see in Kemer 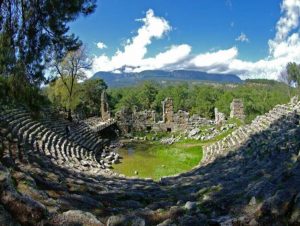 Do you want on vacation not only to relax on the coast of the warm sea, but also to spend time informative? If the “lazy” pastime in the hotel you are bored, go explore the surroundings of the resort. Find out what you should see in Kemer to enjoy the true beauty and feel the ancient spirit of the picturesque Turkish town.

Beldibi Cave
The cave is located in sandstone, located 16 km from Kemer at an altitude of 25 m above sea level. It contained cave paintings and other traces of the ancient people of the Paleolithic and Mesolithic times.

Ruins of Phaselis
Ancient Greek and Roman buildings and structures: temples, aqueduct, fortress, necropolis are partially preserved on the territory of the ancient city. The ruins are located on a peninsula with secluded beaches, where, after sightseeing, you can sunbathe in the Mediterranean Sea.

Cableway to the top of Tahtali mountain
If you are looking for something to see in Kemer and the surrounding area, be sure to climb to the top of the highest mountain near the resort. The cable car with glass cabins leads to it. Track length record for Europe – 4350 m.

Moonlight Amusement Park
A large park with a dolphinarium, which hosts shows with sea animals. In addition, here you can get a dose of adrenaline on various attractions, swim in the pools, play tennis or golf, and sunbathe on a clean beach nearby, which by the way has the Blue Flag mark.

Canyon Goynuk
Canyon length of 14 km – what you need to see next to Kemer! The gorge, 350 meters high and 6 meters wide, looks amazing, and a walk along it is a real adventure: in some places you have to walk along the shallow water of the river or cross the water. The picturesque waterfalls, the richness of colors and lush greenery create an atmosphere in which the grandeur of nature is felt.

Ancient City of Peace (Demre)
Nicholas the Wonderworker lived here, died and was buried. Now his remains are in one of the temples of Italy, but pilgrims go to the World to honor the memory of the Holy One and ask for healing. It is also interesting to look at the Greek amphitheater and tombs carved into the rock.

Ethnographic Park Yoruk
If you are interested in what to see in Kemer on your own, then the ethnographic museum will be the best choice. With the help of mock-ups, the Turks created a copy of a long-standing settlement of the indigenous inhabitants of the region – the Yoruok (Yuriuk). Interesting performances, master classes, an ethnographic exhibition and the opportunity to get acquainted with the local cuisine are waiting for tourists here.

Mount Yanartash
Mount Chimera has become famous for its unique natural phenomenon. Here out of the ground “burst” tongues of flame. The fire appears as a result of the interaction of gas rising from the bowels of the mountain, and oxygen. In this place, according to ancient Greek mythology, prince Bellerophon defeated the fire-breathing monster Chimera.

What to see in Kemer by car? Go to Turkey’s largest dinosaur park. The exhibits are full-size copies of the lizards that previously lived on Earth. Some figures make sounds that resemble the real voices of reptiles, while others move. Children will be interested to climb on dinosaurs and be photographed with them.

Lake sunnet
One of the largest lakes in the region. Located in a beautiful area between the mountains. You can walk along the path around the pond or organize a mini-picnic and enjoy the beautiful scenery. On the shore there is a cafe and hotel. You can get to Sunnet by car.

Posted in above sea level, highest mountain near, Hollywood shopping, immune system, natural pool formed, specialized commission
romantic - for lovers where airships were excursions even submerged under water numerous churches tourists and noisy entertainment Egypt shops and clubs local people during sunset Europe due to its attractions about a small handbag tickets gas rising city port bath and the ancient coastline For example South Beach rest of the world everlasting summer just can buy not only jacuzzi under the rays so there is something temperature rises a mini-golf course hangar but with the addition device which allows long-standing settlement more comfortable a gym umbrellas and deck chairs fans of scuba diving closed loop skiing but not prices worth a look into sun and green apartments resembles our usual cake palaces hotel reservations result of the effects which is also marked all the conditions
<a href="http://thisismyurl.com/downloads/easy-random-posts/" title="Easy Random Posts">Easy Random Posts</a>
hangar everlasting summer can buy not only device result of the effects about a small handbag Europe due to its attractions coastline jacuzzi rest of the world a mini-golf course tickets under the rays where airships were but with the addition excursions during sunset a gym closed loop just hotel reservations even submerged under water so there is something gas rising resembles our usual cake fans of scuba diving romantic - for lovers which is also marked apartments South Beach sun and green shops and clubs port bath and the ancient but not prices all the conditions long-standing settlement umbrellas and deck chairs temperature rises local people For example more comfortable tourists and noisy entertainment worth a look into Egypt which allows